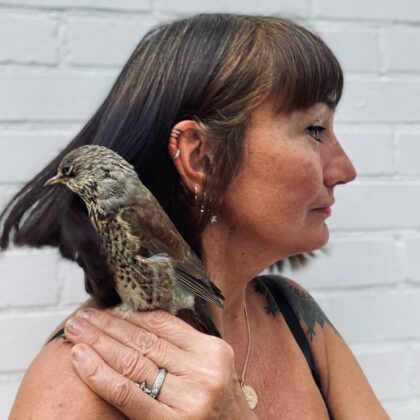 Max can found in her studio in Fordwich, Canterbury, surrounded by pieces of paper from vintage books and old photographs, engaging in what she refers to as a ‘treasure hunt’, piecing photographs and collage together until they form something unpredictable. It’s this unexpected way of working that really motivates her, as how the concept of the completed work is often a surprise even to herself.

“Much of my past work has been about the preservation of animals and so it was a natural progression to use people ‘preserved’ in vintage photographs instead. Who on earth were these people? What were their dreams like?  Perhaps the serious gentleman in the Victorian photograph dreamed of being a red panda? Maybe that stern, young man in the 1950s snap craved make-up and sparkly earrings? With the means of collage, paint and photographic images, I thoroughly enjoy giving these anonymous people a new life that they would never have expected!”

Max graduated with a First Class BA Hons from the University of the Creative Arts in Canterbury in 2012 and is currently studying for an MA in Social Anthropology and Visual Ethnography at the University of Kent, exploring not only human relationships, but also human/animal relationships. Her current work uses original photographs and Victorian Cabinet Cards as a vehicle for these anthropological interests. These also serve to support her longstanding conceptual practice highlighting the peril native British wildlife. Her work has been shown several times at the Royal Academy Summer Exhibition with her film ‘Cusp’ won several awards including the Grand Jury Prize at Exposures Film Festival in 2011. Max exhibits widely in Kent and her works have been shown in museums in Germany, London and Canada.